Journal of Preventive Medicine and Care

Current Issue Volume No: 3 Issue No: 1

Radial Club Hand (RCH) is a rare and complex congenital disorder of the pre-axial border of the upper extremity. It is a congenital longitudinal radial ray deficiency which presents as radial deviation of the hand and distal forearm in the shape of a golf club 1, 2. Radial ray deficiency (the most common type of longitudinal failure of formation) is a spectrum of malformations affecting the structures of the radial side of the forearm, including hypoplasia of the bones, joints, muscles, tendons, ligaments, nerves and blood vessels. The thumb dysfunction, wrist instability and short upper extremity that accompany this condition can cause significant functional impairment particularly in patients with bilateral involvement. Thus, the performance of activities of daily living such as accomplishing personal hygiene, fastening buttons and zippers becomes challenging 3.

Radial Club Hand (RCH) is a rare and complex congenital disorder of the pre-axial border of the upper extremity. It is a congenital longitudinal radial ray deficiency which presents as radial deviation of the hand and distal forearm in the shape of a golf club 1, 2. Radial ray deficiency (the most common type of longitudinal failure of formation) is a spectrum of malformation affecting the structures of the radial side of the forearm, including hypoplasia of the bones, joints, muscles, tendons, ligaments, nerves and blood vessels. The thumb dysfunction, wrist instability and short upper extremity that accompany this condition can cause significant functional impairment particularly in patients with bilateral involvement. Thus, the performance of activities of daily living such as accomplishing personal hygiene, fastening buttons and zippers becomes challenging 3.

In humans the upper limbs form between the 4th and the 8th post-ovulatory weeks. The molecular basis of RCH is unknown but the cause is thought to be a defect in the mesodermal development due to a genetic or environmental insult to the apical ectodermal ridge (AER) occurring between the 4th and 5th embryonic week 6, 7. The AER is a thickened layer of ectoderm that directs differentiation of the underlying mesenchymal tissue and limb formation. Defects in the sonic hedgehog signaling pathway have been identified 4, 8. Early prenatal exposure to antiepileptic drugs (valproic acid, phenobarbital), thalidomide and aminopterin has been associated with radial deficiency 9.

Affected individuals have a high incidence of medical and musculoskeletal abnormalities that increases with increasing severity of the deficiency 10. Table 1 highlights some of these abnormalities. 11, 12, 13, 14, 15.

Radial ray deficiency has a wide range of phenotypic expression from hypoplasia of the thumb to complete absence of the radius and the first ray, as shown in table 2 below. 15

There have been very few reports of this condition from Africa. We report our experience in the management of a case of bilateral RCH in a boy who was treated surgically at the age of 19 months.

A 1month old infant presented to our hospital with deformed forearms since birth. He was born to a 32-year-old multiparous petty trader at term through a spontaneous vaginal delivery after an uneventful pregnancy. His mother neither ingested alcohol nor smoked cigarette before or during the pregnancy nor suffered from any chronic illness. She used only the recommended medicines (folate and ferrous sulphate) during her hospital supervised pregnancy. She, however, had no fetal anomaly scan during this period. No other family member had had such a presentation.

Physical examination revealed a young infant who was active. Both forearms were shortened and bowed ulnarwards. There was severe radial deviation at both wrists. There were no abnormalities detected in other systems. X-ray confirmed bilateral Bayne type IV deformity, Figure 1. Complete blood count was normal.

Figure 1. Depicts pre-operative radiographs of the forearms of the infant showing bilateral absence of the radius 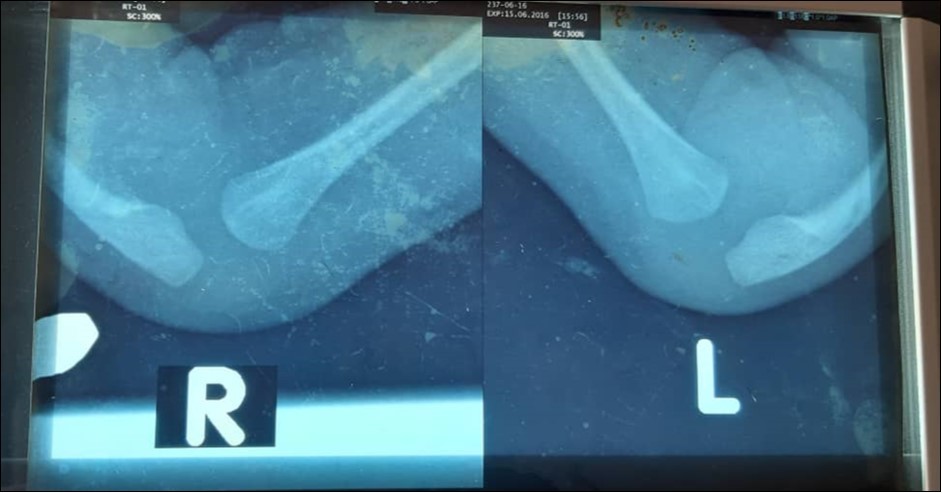 Figure 2. Immediate pre- and post-operative pictures with both forearms in supination 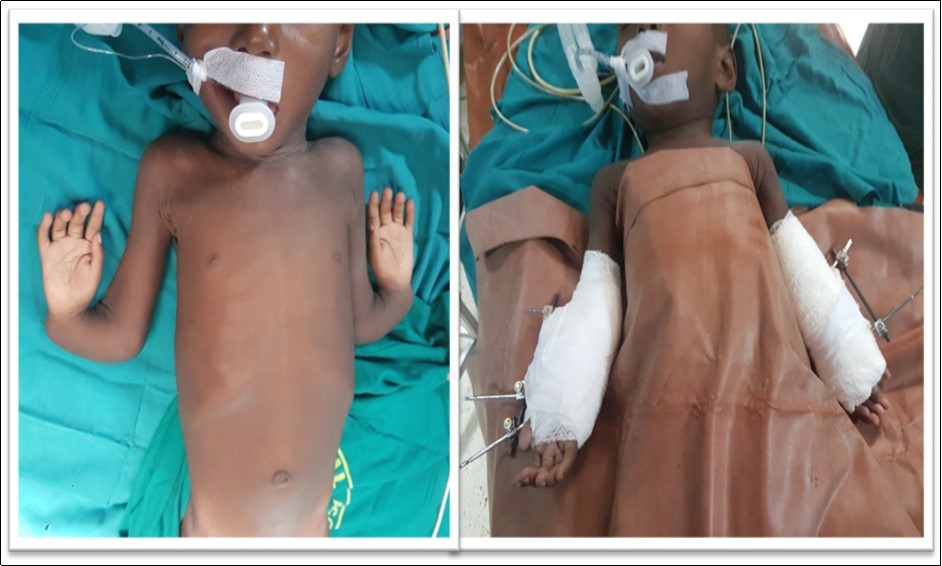 Our operative procedure began with a five-centimeter incision along the subcutaneous border of the ulnar on both sides. The wrist and forearm deformities of both sides were corrected at the same sitting, we first corrected the deformity on the right side followed by that on the left. Next, a medial based closing wedge osteotomy of the ulna was performed at the mid shaft and the contracted radial wrist soft tissues were released via a five-centimeter transverse incision along the wrist flexion skin crease on the radial aspect of the wrist. This was done with care to preserve the branches of the superficial radial nerve. The flexor carpi radialis tendon was detached routed subcutaneously and attached to the extensor carpi radialis brevis tendon end-to-side using Pulvertaft weaves and nylon 3-0 suture, for extension of the wrist. .

The ulnar osteotomy was stabilised with an intramedullary 2.0mm Kirchner wire (K-wire). Wrist bridging external fixators were mounted bilaterally to maintain correction until 12 weeks after surgery. Intraoperative fluoroscopic image of the correction of the left forearm is depicted in figure 3.

Figure 3. Fluoroscopic image showing the K-wire running from the 3rd metacarpal to bridge the ulnar osteotomy. The Schanze screws of the external fixator are shown, one each in the first metacarpal and in the proximal ulna with the forearm in pronation. 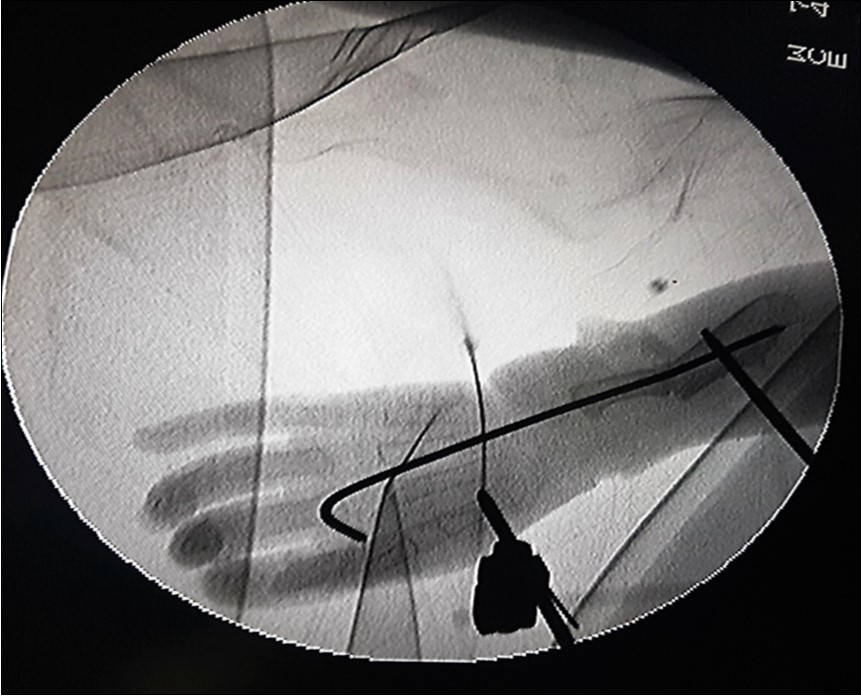 There was satisfactory correction of his deformities at his last out-patient review with acceptable mobility of the wrist, metacarpophalangeal and interphalangeal joints on either side with adequate grip strength of both hands. Active and passive physiotherapy are still on-going.

The diagnosis of RCH is suspected clinically and confirmed with plain radiographs of the affected limbs. Our patient’s presentation was non-syndromic and there was no identifiable risk factor in his medical history. The management of RCH should commence soon after birth and includes serial manipulation and splinting. The goal is to stretch the contracted soft tissue and radial structures to achieve passive correction of the deformity by aligning the hand and the wrist with the ulna. Sufficient soft-tissue stretching before surgery is a prerequisite for a successful surgery. This should be performed earnestly until the time of surgery 16. This necessary conservative optimization for our patient lasted 18 months which also allowed for growth of tissues and thus made the subsequent surgical correction easier. Figure 4.

Figure 4. The appearance of the forearms at 12 weeks after removal of the external fixators 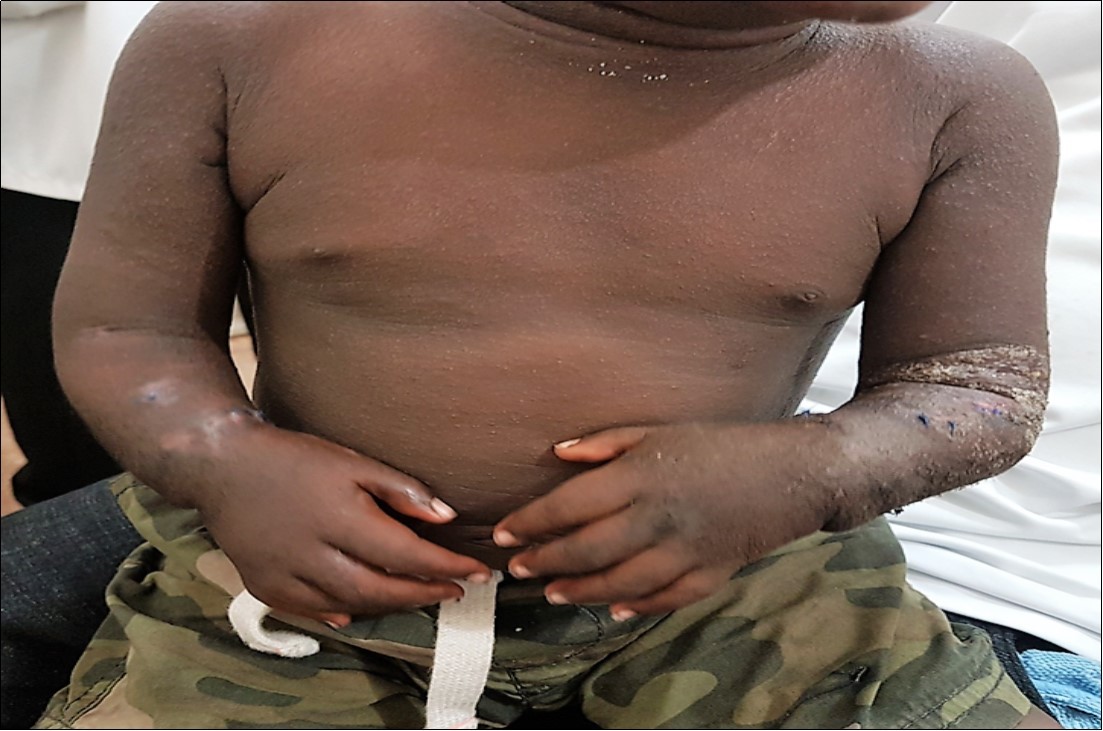 A popular surgical method is the centralisation of the carpus with tendon transfer so as to maintain the corrected position of the carpus 17, 18. The first centralization of the wrist into the distal ulna was performed by Sayre in 1894 19. Gradual correction using the Ilizarov method for Bayne Type III or IV has also been described. Severe radial deviation of the wrist recurred 20. To date there is no established treatment method for mild radial ray deficiency (Bayne Type I or II). In severe cases of radial dysplasia, ulna shortening osteotomy facilitates centralization of the carpus 21. In this report we present our centralization procedure for Bayne Type IV with ulnar shortening osteotomy, soft tissue release of the radial wrist and maintenance of correction of deformity with a unilateral uniplanar wrist-bridging external fixation.

The post-operative course was uneventful and our outcome satisfactory. The child would be followed for recurrence of radial deformity.

We have presented our management of a boy with Bilateral RCH (Bayne Type Type IV) starting with serial stretching and casting of deformities followed by ulnar osteotomy which enhanced centralization of the carpus. In Bayne Type IV deformity, soft tissue release, distraction and ulnar osteotomy is a good operative method of correction. A long-term follow-up is recommended.