Current Issue Volume No: 1 Issue No: 1

The apical meristem of plants comprises proplastids and juvenile chloroplasts. This work considered the most initial stages of the transition from proplastid to chloroplast. Ultrastructural analysis of apical meristem sections showed the formation of chloroplast envelope membranes and the synthesis of thylakoid membranes to be independent processes, and the production of thylakoid membrane proteins to directly involve cytoplasm ribosomes.

In an earlier work on wheat seedlings, proplastids have been shown not to be a priori formed bodies, as it had been generally recognized, but to form in the apical meristem in several stages 1. A stage-by-stage filling of plastid DNA-containing membrane vesicles with a dense matrix has been observed. Formed proplastids, spherical bodies of 1–2 mm in diameter restricted by a membrane, contain a dense matrix. The proplastid is a chloroplast precursor.

The very first stages of the differentiation of proplastid into chloroplast have not been described. Images of young species have been demonstrated 2, 3, 4, 5, 6 but those are completely formed chloroplasts. They have a dense matrix enclosed into an envelope and a system of thylakoids at different degrees of development.

This work demonstrated on an ultrastructural level images of proplastids and the very first stage of proplastid to chloroplast transition in the apical meristem of flax.

The purpose of this study is to present new ultrastructural data that make it possible to understand the process of transition of proplastids to chloroplast.

The subject of the study were 12–14-day-old plants of flax (Linumusitatissimum L.). The plants were grown in pots with soil at natural illumination at a room temperature of 20–23°С up to 12–14-day age. Specimens from three independent experiments were examined.

Material was fixed and prepared for examination according to the standard methods. The upper part of a seedling was fixed in a 2.5% solution of glutaraldehyde on phosphate buffer (pH 7.4) for 2 h followed by postfixation in a 1% solution of OsО4. Then specimens were dehydrated in a series of alcohols and 100% acetone and embedded in Epon-812.

Ultrathin sections were contrasted with a saturated aqueous solution of uranyl acetate and 0.25% lead citrate according to the standard techniques and examined in a JEM-100В electron microscope (JEOL, Japan) at an accelerating voltage of 80 kV.

The apical meristem of a flax seedling is represented by 2–3 rows of upper cells. These cells comprise the cytoplasm with a high density of ribosomes (1000–1200/mm2), dividing nuclei and numerous small vacuoles and proplastids. Vacuoles and proplastids are of commensurable size 1–2 mm (Figure 1a).

Figure 1. Cells of the growing point apical meristem. (a) General view; (b) segment of a cell at high magnification. Proplastids have no envelope and contain proplastid DNA (arrows). N, nucleus; P, proplastid; V, vacuole. Scale bar, (a) 1 mm; (b) 0.2 mm. 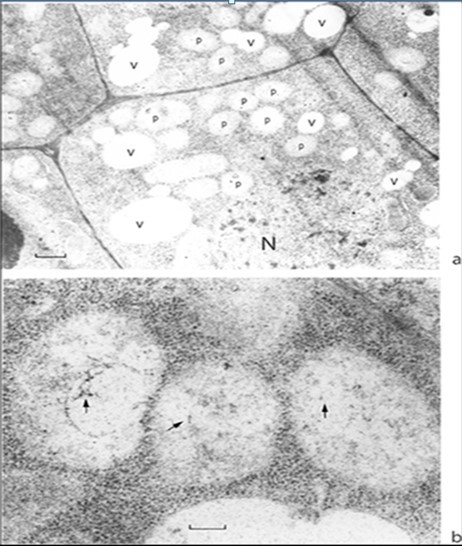 The bulk of proplastids was represented by bodies containing a loose matrix and plastid DNA. The proplastid envelope was either absent altogether (Figure 1b) or was formed but not closed (Figure 2a). 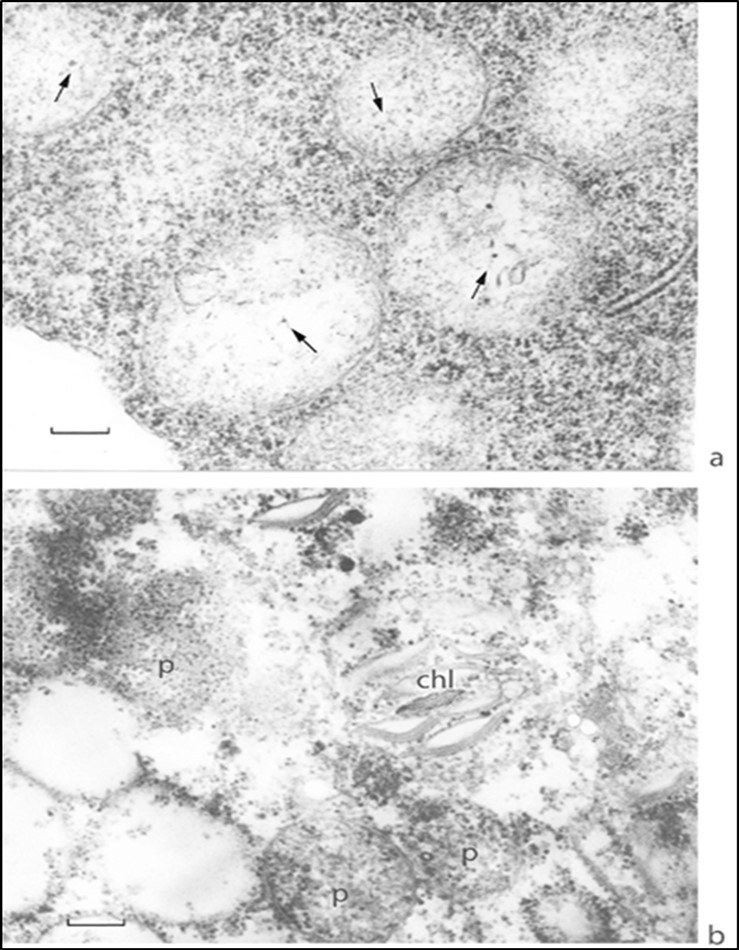 The pattern of structural proplastid to chloroplast transformation can be seen in Figure 2b. Arranged side by side are proplastids without envelopes but with ribosomes in their matrix and a juvenile forming chloroplast containing stacks of thylakoids but having no formed envelope.

Figure 3 shows forming chloroplasts at high magnification. Cytoplasmic ribosomes make up a common field both for the interior and exterior of the chloroplast (Figure 3a, b). Ribosomes are ≈ 25 nm in size.

Figure 3. Juvenile chloroplasts at high magnification. (a) Stacks of granal thylakoids are enclosed with an incompletely formed envelope; (b) are envelope-free. Cytoplasmic ribosomes make a common field both inside and outside the body of a chloroplast. Envelope fragments are shown by arrows. Scale bar, 0.1 mm. 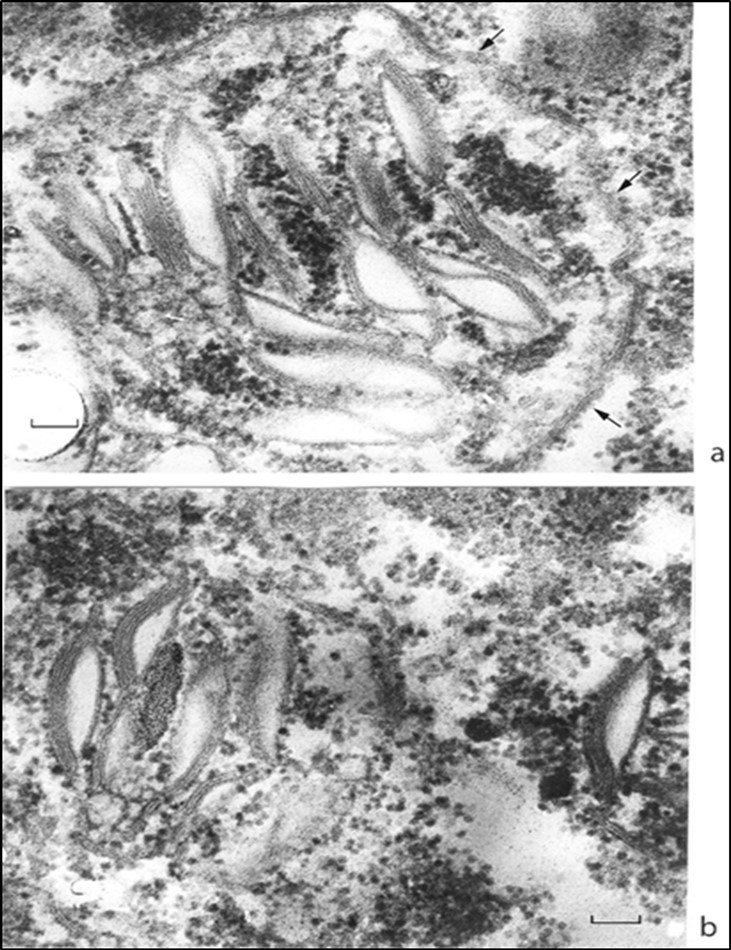 The juvenile chloroplast envelope is either fragmentary (Figure 3a) or is absent altogether (Figure 3b).

Thylakoids are arranged in stacks (grana) of 2–6 species each and are densely packed so that the internal compartment of a thylakoid (the lumen) is not visible. The marginal thylakoids of a granum are strongly swollen and, probably, represent the first stage of thylakoid membrane synthesis. Compressed thylakoids are 20 nm thick (Figure 3a, b).

No intergranal thylakoids were observed at this stage.

The structural transition of proplastid to chloroplast has always been of interest, but concrete data are scarce.

The organization of formed proplastids is simple – an oblong body with a dense matrix enclosed by a membrane – but the structure of chloroplast is much more complex. Chloroplasts contain photosynthesizing membranes, thylakoids, which represent flattened sac-like paired membranes having an internal space, the lumen, and organized into a network. The network consists of grana, stacks of thylakoids in close contact one with another, and single thylakoids that connect grana into a common system. The entire thylakoid system is immersed into a matrix and is enclosed by two membranes of the envelope.

Proceeding from the images presented above, it can be assumed that proplastids not merely transform into chloroplast to synthesize a system of thylakoids, but totally change their essence. They lose their envelope, but their matrix is permeated with cytoplasmic ribosomes, and thylakoid membranes are synthesized in this field, stacks of grana are formed. Chloroplast envelope membranes are synthesized simultaneously but independently of the synthesis of thylakoids. Intergranal thylakoids seem to form a little later.

The direct involvement of cytoplasmic ribosomes in the system of thylakoid membranes is very likely as more than 3000 chloroplast proteins (97%) are coded for in the nucleus 7.

On the schemes presented in reviews 8, 9, 10 proplastids are enclosed into a double membrane, and it is assumed that, by invagination or by production of membrane vacuoles 11, the proplastid inner membrane gives rises to thylakoid membranes.

In the apical meristem of flax, as in the wheat meristem 1, proplastids either have no membrane envelope altogether or else the envelope consists of one membrane, and it is not closed. In 12, images of proplastids enclosed by a double envelope have been shown.

Presumably, there are two states of proplastids, the first being their preparedness for the transition to chloroplast (the proplastid without an envelope), the second their stable state (the proplastid enclosed by a double envelope).